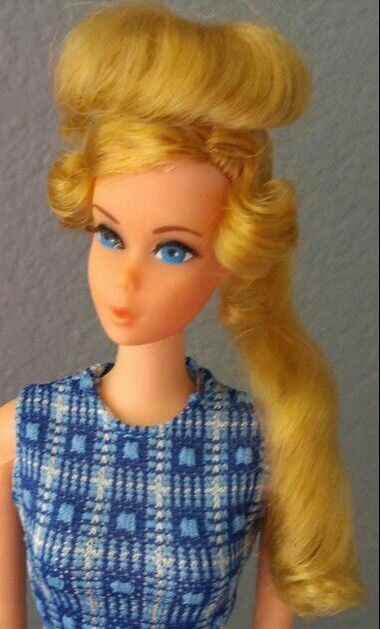 Barbie Millicent Roberts (1959) The first #Barbie doll was described as a "Teen Age Fashion Model" and her parents' names are George and Margaret Roberts. Barbie grew up in fictional Willows, Wisconsin. (I love this little fun fact since I also grew up in Wisconsin!)

Midge Hadley Sherwood (1963) She was Barbie's best friend and the third character introduced to the Barbie line, following Barbie and Ken. She was paired with Allan Sherwood, Ken's best friend, when Allan was introduced in 1964. #Midge

Francie Fairchild (1966) Francie is Barbie's cousin. In the March 1966 issue of Barbie Magazine, Francie was the daughter of Claude and Lily Fairchild. Some believe that the Francie doll may have been based on the character "Gidget," whose real name was Frances Lawrence (sometimes called Francie). Francie was such a smash hit that she led the way for Barbie's makeover and MOD debut in 1967. #Francie

Twiggy (1967) Twiggy was based on the famous fashion model, Lesley Hornby Lawson, of the Mod era. Twiggy resembled Casey but with heavier painted-on makeup. The Twiggy doll was made through 1968, and Casey through 1970. #Twiggy

Stacey (1968) Stacey was Barbie's "British chum," part of the new group of Talking dolls in 1968. She was later issued as a Twist 'N Turn version. These are the only two types of Stacey dolls ever made. #Stacey

P.J. (1969) P.J. was a friend of Barbie's and initially marketed as "New 'N Groovy Talking P.J." To date, Mattel has declared that the initials P.J. don't stand for anything, that it is simply the doll's name. #P.J.

Julia (1969) She was based on Diahann Carroll's character from the TV show Julia. #Julia

Steffie (1972) She was available as Busy Steffie, Talking Busy Steffie, and Walk Lively Steffie. Though the character was discontinued after only a year, she is notable in that none of the three Steffie dolls featured the same eye color/hair color combination. #Steffie

“My whole philosophy of Barbie was that through the doll, the little girl could be anything she wanted to be. Barbie always represented the fact that a woman has choices.” Ruth Handler, on being inspired by her young daughter Barbara's fascination with teenage life and love for fashion dolls. Ruth and Elliot Handler founded Mattel in 1945 and 14 years later, Ruth gave the world the Barbie doll. When asked her relationship to Barbie, Ruth simply replied, "I'm Barbie's mom." #RuthHandler

For the record Barbie has never been married (she just likes to model wedding gowns for her designer friends), has never been pregnant (that was her best friend Midge), Barbie's real measurements are 5” (bust), 3” (waist) and 5” (hips). Her weight is 7 ounces because she's plastic. Barbie technically has had plastic surgery on her face and body. Barbie released her own re-recorded version of the 90s hit song Barbie Girl, and.... she's a doll, people!

Read more about Mod Barbie's history. And here is another Barbie history site.