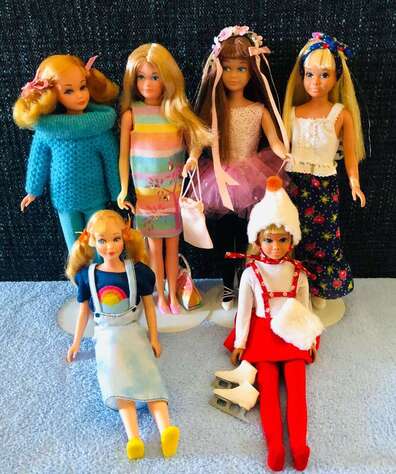 ​Skipper, Barbie's little sister, was introduced in 1964. Mattel created Skipper for younger children who couldn't relate to older teen Barbie. Skipper had her own line of fashions, her own bedroom furniture and fun friends like Scooter, Ricky, Tiff and Fluff. Skipper's early outfits were inspired by Barbie's fashions but, by 1966, her clothing no longer imitated her older sister's styles. Her fashion designs were her own and inspired by trends at those times - from op art prints to funky bell-bottoms! #Skipper doll

To learn more about vintage Skipper, I highly recommend visiting "A Guide to Vintage Skippers" or getting my favorite research book below, "Skipper, Barbie Doll's Little Sister, Second Edition."​ And here is some good info on Skipper head molds. An awesome Facebook group on Skipper has fantastic photos and the members are really nice!